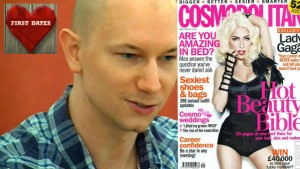 Going on a date with a Cosmo journalist on TV – that’s normal, right?

Last week, Rosie Mullender wrote about her experience of appearing on Channel 4’s First Dates. Here, her date gives his side of the story…

As a single guy in my 30s, I’ve been on dates with friends, friends of friends and friends of strangers. I’ve tried speed dating, online mating and nightclub gyrating, but still I remain alone. Facing a life of romantic meals (for one), and bowing to the pressure of my ever-concerned housemate, I agreed to become a “background dater” on the new series of Channel 4’s First Dates. It would be one afternoon, two people, and a thousand cameras. What was I letting myself in for?

As I arrived on the day of filming, I pondered over the woman I would meet. Unlike every other date in my life, I hadn’t a single clue who to expect. There were no pictures, no profiles, no favourite films, not even a sentence about food poisoning in Peru that we might reluctantly discuss over lunch. Given free rein to dream, I imagined her with a big beaming smile, easy-going, with a love of mid-day naps and 80s movies (specifically those starring Michael J Fox that begin with “Back” and end in “Future”).

Approaching a production assistant, I asked if he knew anything about my date and, after checking his clipboard, he said “her name’s Rosie.”

Armed with this information, I waited anxiously to enter the restaurant. What the viewers of the show won’t know is that the whole thing is run like a secret military operation.

On every corner outside the restaurant there is someone in headphones herding guys and girls in shiny shoes up and down alleyways. What the viewers are also unable to appreciate is just how cold it was waiting outside. It was frickin’ freezing! As my body turned to ice, I prayed I might find a “Woolley Blanket and a Hot-Water Bottle” on the menu and dreaded what Rosie would think of my runny nose and now disturbing nipple erection.

Suddenly I was called to go in, at which point my panic level went through the roof. This was then made worse when another assistant revealed that Rosie was actually working for Cosmo and would write a detailed article on the fun and frolics that ensued. Could I possibly be under more pressure on a first date? I swallowed nervously, my voice breaking like I’d regressed to puberty, and made the long walk to the restaurant. There was no turning back now.

Entering the building, I gave my name and handed over my coat, simultaneously popping open three shirt buttons and exposing my chest to the diners (not the slick start I’d wanted!) Adjusting myself quickly, I was then led to a table where I saw a very attractive woman in a blue and yellow dress and some VERY sexy Alice-in-Wonderland-meets-Catwoman red shoes. I really hoped this was my date! Rising from her seat, the woman beamed a big beautiful smile and introduced herself as Rosie, she was exactly as I had imagined.

Soon it became clear that Rosie and I found our predicament as funny as it was awkward. There we were, two strangers making chitchat as the cameras recorded our every move. To kick-start the date, Rosie ordered a glass of white wine. I then betrayed my faux-masculine exterior and ordered a pink Fliritini (I have a sweet tooth, what can I say?)

The next challenge was to order some food that could be consumed with skill and confidence. They say never order spaghetti on a first date, I’d say that’s doubly true when it’s being watched by the nation. After weighing up our options, we both chose steak, a solid choice that would never let us down.

As we chatted away, I realised how comfortable I felt with Rosie. My initial fears of meeting someone from the press were entirely without reason. Rosie was incredibly open and funny, telling me stories about the extreme research she often did for her articles, which ranged from creating new intimate positions with her team at Cosmo to operating a phone-sex line in her office (while spanking the desk with a ruler for effect).

Ordering more drinks, I told Rosie about my (sometimes painful) experiences as a stand-up comedian, what happened on my dates from hell (of which there are many) and how I once regretted taking Viagra before a trip to the swimming pool… it’s a long story. I definitely felt Rosie and I had a connection, and when she revealed her love of mid-day naps and 80s movies, I knew there was no other woman in the restaurant I would rather have dated.

Quicker than we could say “The Cat in the Hat” – Rosie’s a big fan of Dr Seuss – we had finished our meal. Four hours had passed and every other couple in the restaurant had moved on. Realising that we’d taken up enough screen time, and there was probably another couple waiting in the freezing alleyway (equally concerned over their nipple erections), we decided to head off.

As we walked to our taxis, Rosie and I exchanged numbers and a little peck on the cheek. I could not have hoped for a more a funny, cheeky, excitable and attractive date that evening. Her show-stopping red shoes were also a bonus! Whatever happens between us, whether we simply become friends or whether one day, years from now, we’ll look back and laugh at how we met… snuggling up together for a mid-day nap… this may have been our first date, but I hope it won’t be our last.

Hitler Has A Micro-Penis! Glover Time